The internet can be tricky to navigate, especially when it comes to identifying legitimate sites and opportunities. Unfortunately, there has been a huge surge in the amount of investment fraud online and over other channels in recent years, with more people than ever losing money to scammers.

This trend isn’t limited to any specific country, investment fraud instances are skyrocketing around the world. It’s more important than ever for investors to properly compare brokers before making an investment, ensuring that the platform they choose is reputable, trustworthy and suited to their specific needs.

As unscrupulous fraudsters take advantage of an increasing number of investors, BrokerChooser set out to investigate to what degree the global situation deteriorated over the past few years. We focused on three individual countries (the USA, the UK and Australia) to reveal the state of investment fraud in each and how it’s changed since pre-pandemic levels.

Investment Scams in the UK

The Financial Conduct Authority (FCA) - the UK regulator for financial services -, is responsible for protecting consumers from scams and other untoward practices. The FCA published the number of investment scam cases opened each month from April 2020 to March 2021.

Over the course of the 12 months, 1,715 individual cases were opened in relation to investment scams, showing that the risk of being scammed is real and retail investors need to tread carefully and seek out trusted brokers. 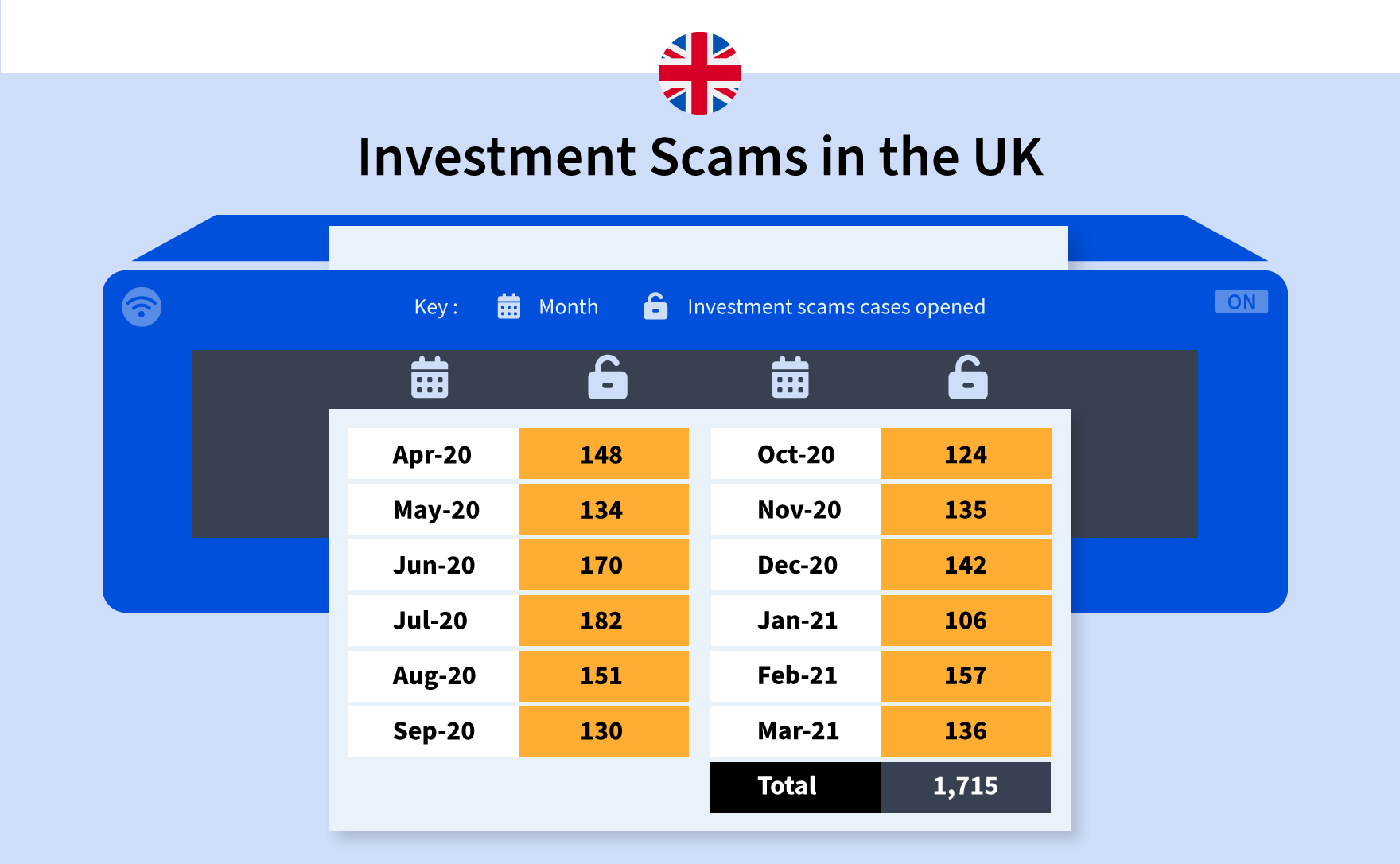 This table show the financial products that were reported the most often to the FCA’s ScamSmart website in the given period. 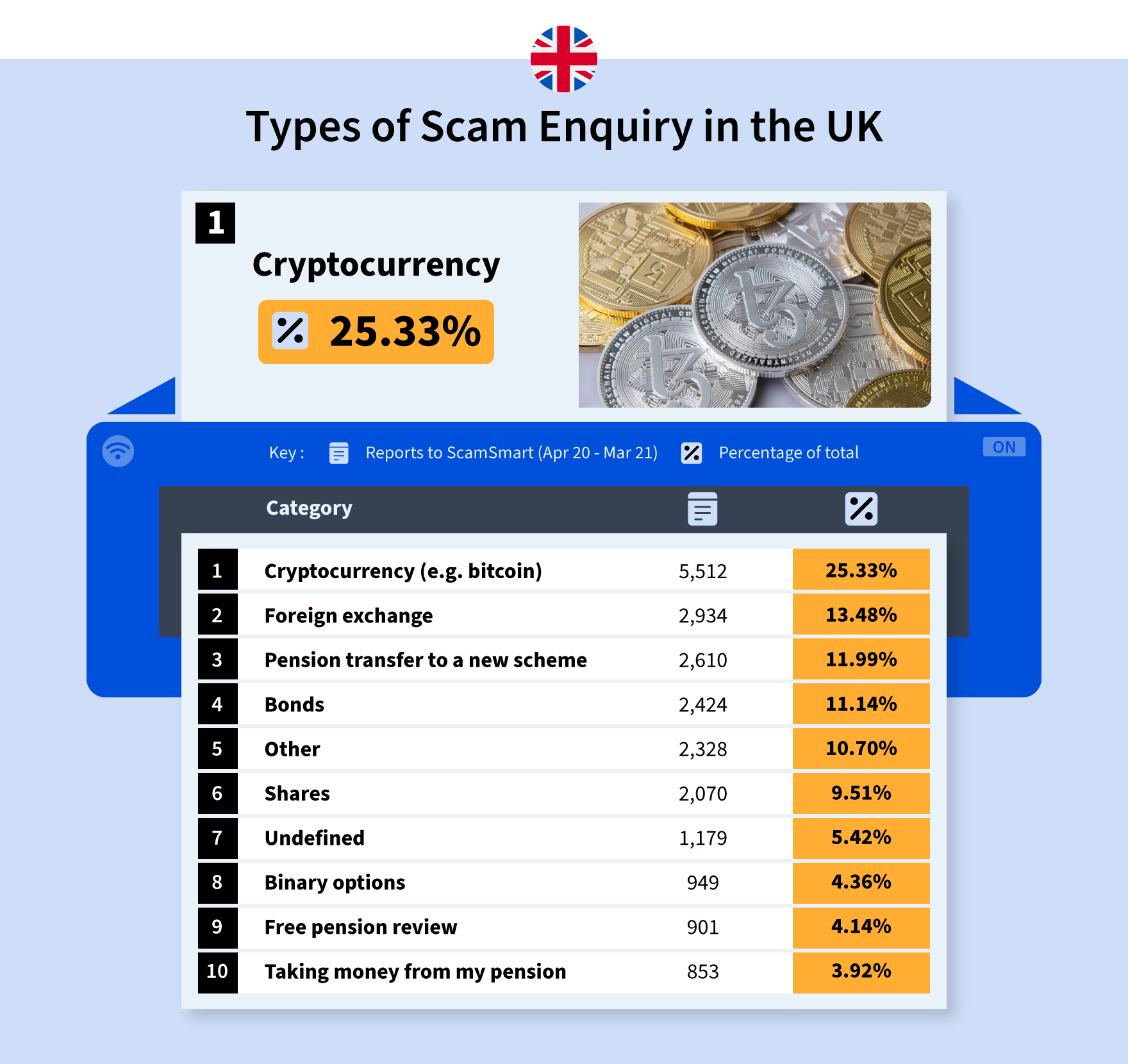 With 5,512 reports to the ScamSmart website in one year, cryptocurrencies are by far the most popular asset among scammers, accounting for 25.33% of the total number of reports in the period. This indicates that investing in cryptocurrency carries the additional risk of a high number of scammers, in addition to the risk of a volatile and often unpredictable market.

As a relatively new financial product that many regulators have yet to fully tackle and investors often struggle to understand, it should come as no surprise that scammers have identified the market as a prime target.

In this section, we look at the different ways in which scammers make contact with their victims. They use a range of contact methods and we can see the number of reports for each method as displayed on the ScamSmart website in the year to March 2021. 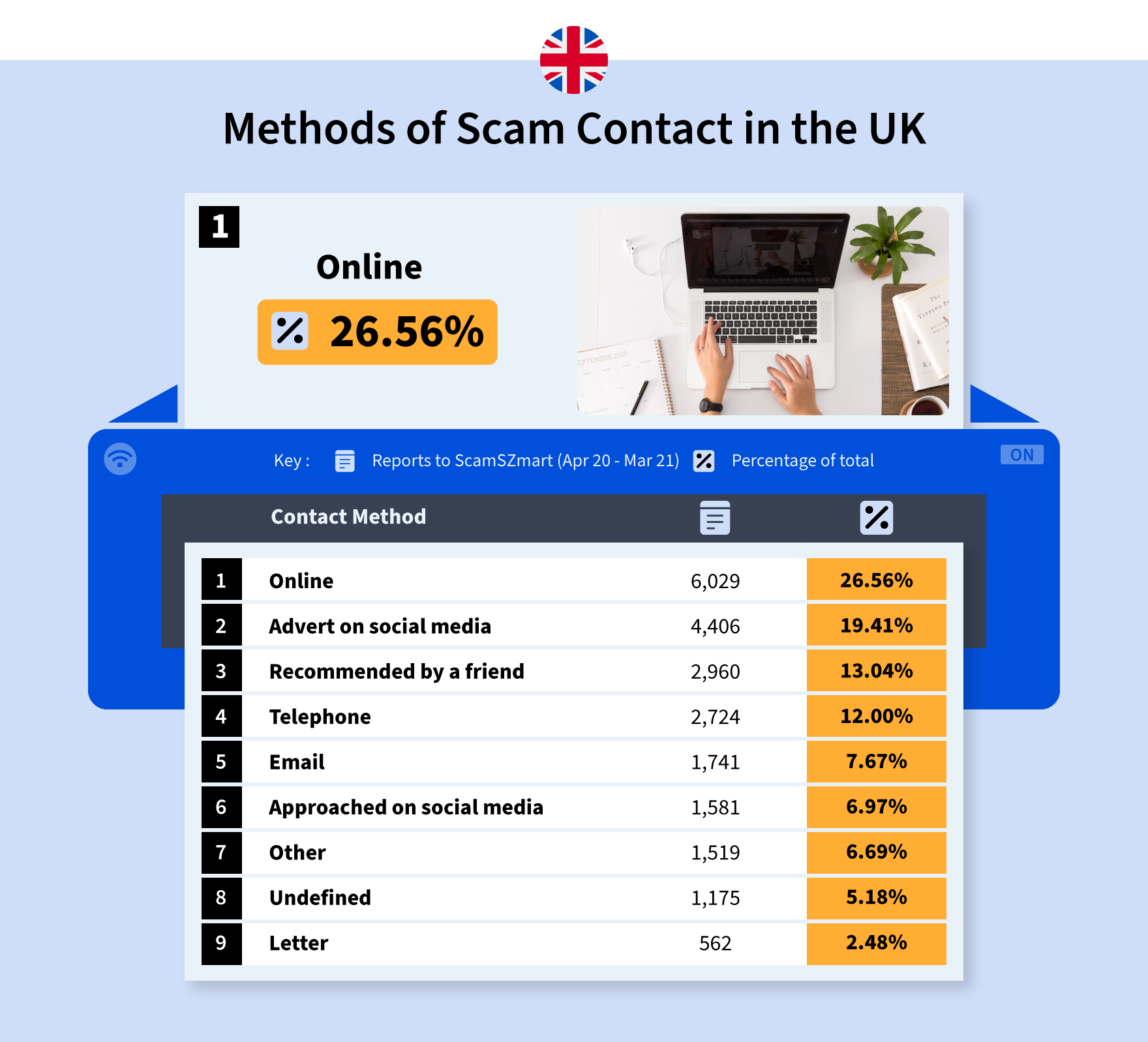 The most common way for scammers to make contact is online, accounting for 26.56% of incidents. There are many ways you can be scammed online, including websites for non-existent investment opportunities or clones of reputable trading websites that catch users out with their disguise.

One way of avoiding such traps is to always double-check the URL of the website to ensure it is a legitimate site, while also checking reviews and ratings for new sites that you’re unfamiliar with.

As shown below, the annual total number of scam enquires received by the FCA in the 2016 -2020 period shows a mixed picture.

In 2020, the total number of scam enquiries was 24,689 after a 55.04% increase from 2019 figures, which is more than double the number of reports from 3 years earlier. This huge increase in reports shows that scam enquiries have been growing at an exponential rate, suggesting that consumers are facing an ever more dangerous landscape when it comes to investing safely. 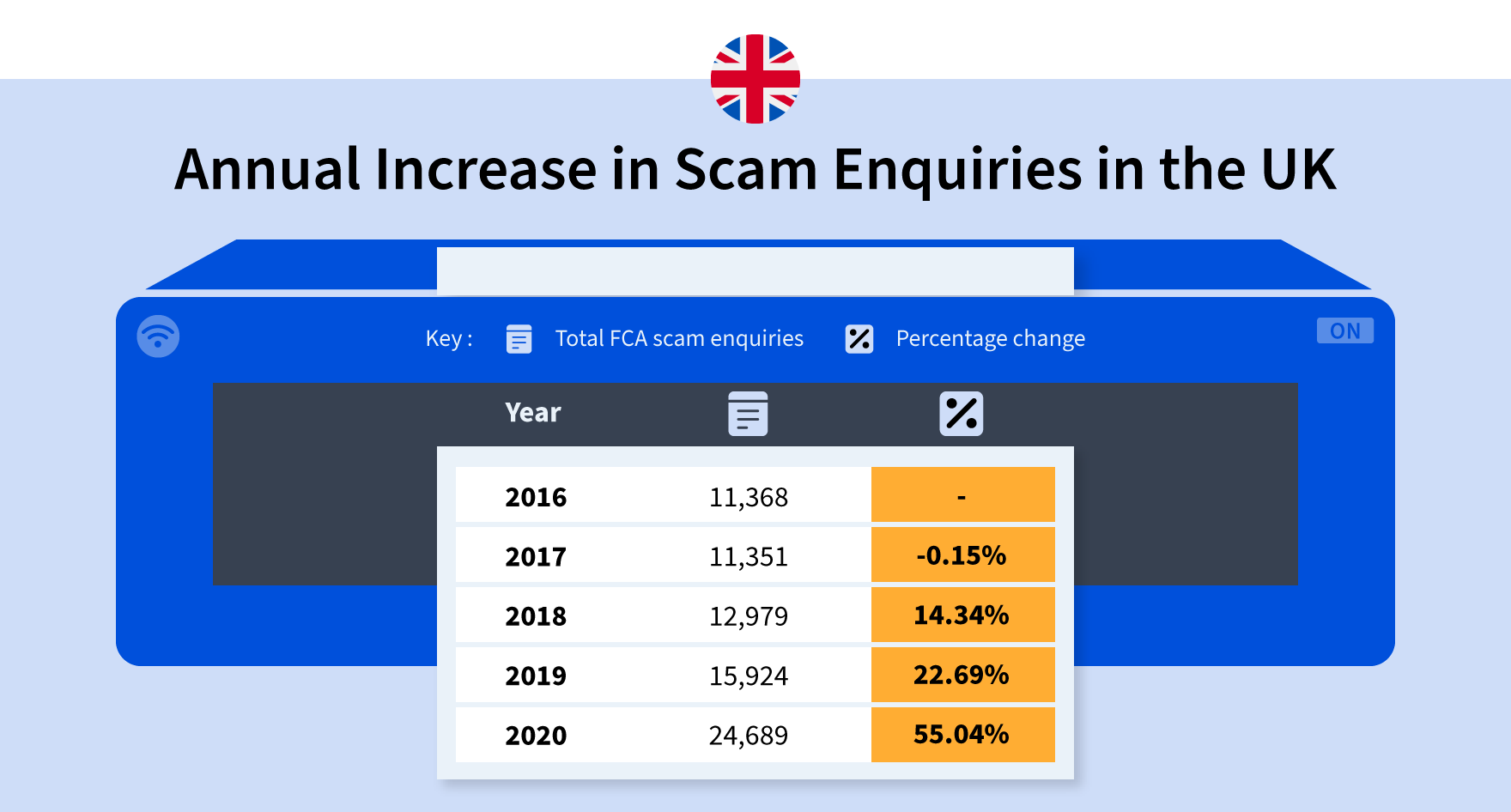 Here we look at the crime statistics for ‘fraud and computer misuse’ in the UK, split by the police force area in which each crime was recorded. So, which is the riskiest place for investing in the UK? 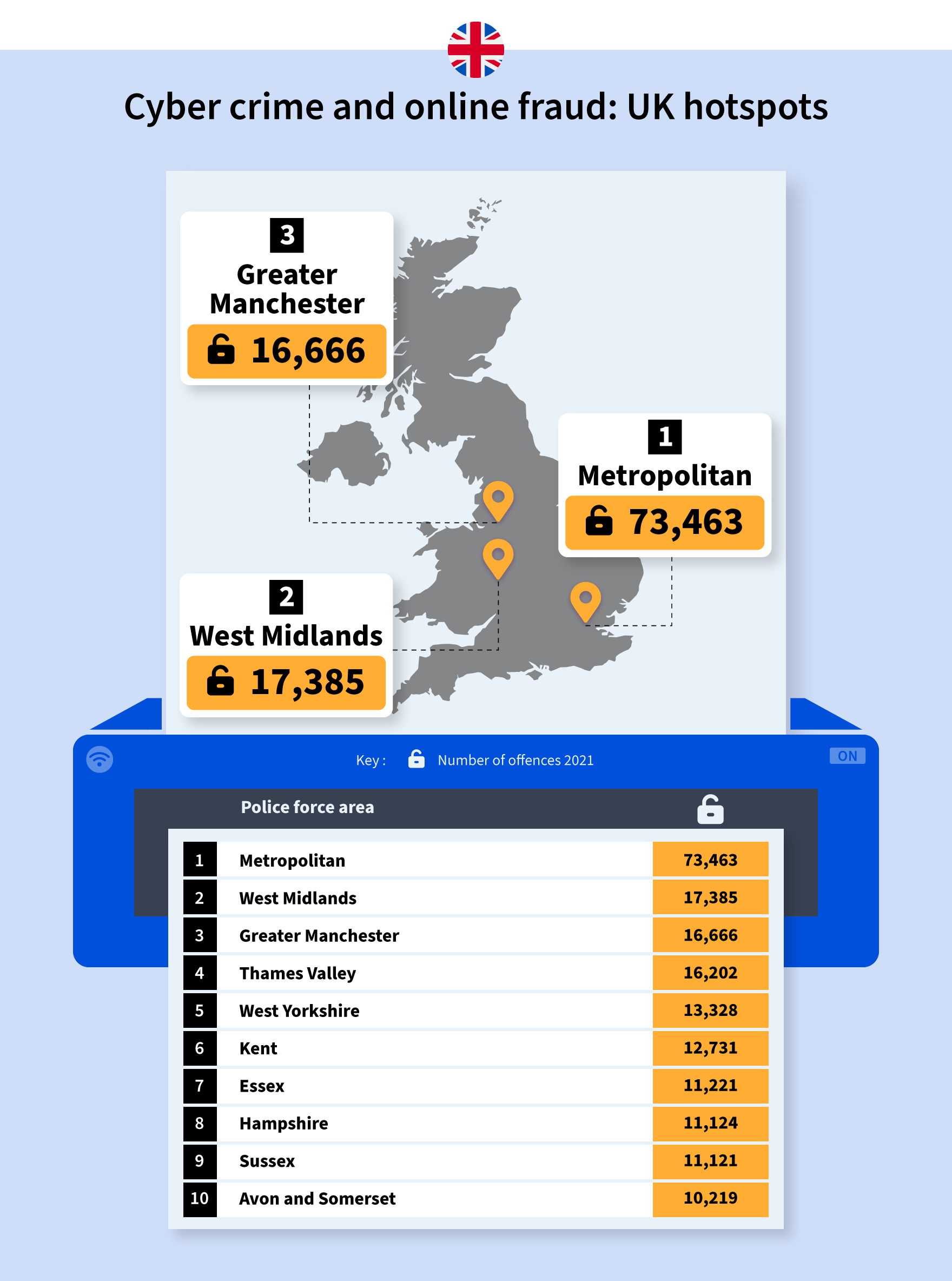 The police force dealing with by far the highest number of fraud and computer misuse offences is the Metropolitan Police with 73,463 separate offences, making Greater London the UK area with the biggest online fraud problem.

In second place is West Midlands Police, who saw 17,385 fraud and computer misuse offences take place within their jurisdiction which covers Birmingham, Coventry and Wolverhampton.

The police force with the third-highest number of fraud and computer misuse offences is Greater Manchester Police, which recorded a total of 16,666 such offences in 2021.

Let's take a more in-depth look at investing in the United States, and how much of an impact fraud is having in different parts of the country. We’ll reveal the states with the highest victim count and average losses per fraud incident for 2021, as well as look at how these stats have changed since 2019. 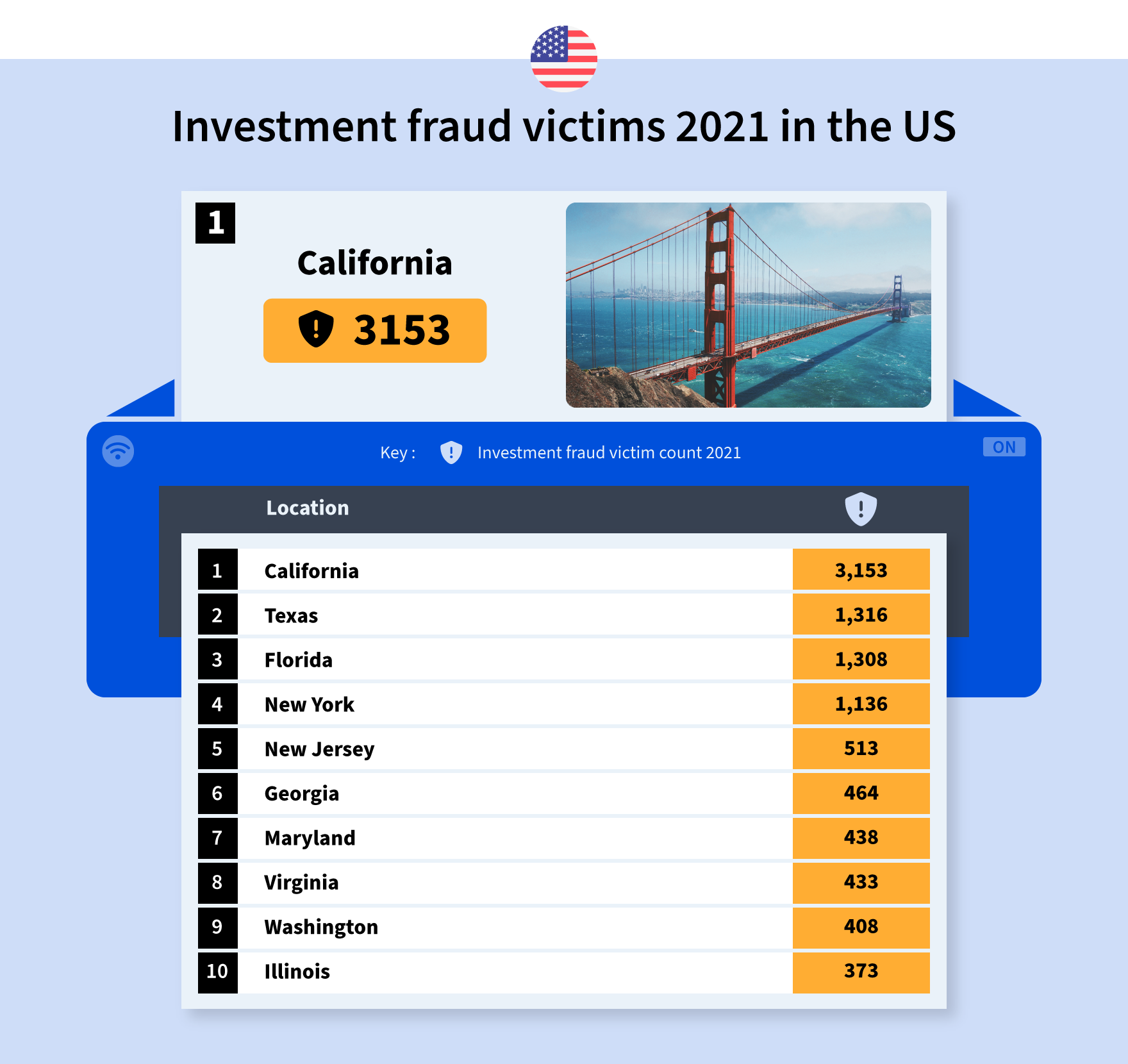 The state with the biggest investment fraud problem is California, which saw a total of 3,153 victims of investment fraud in 2021. This is more than double the number of any other state, with Texas coming second at 1,316 and Florida placing third with 1,308. 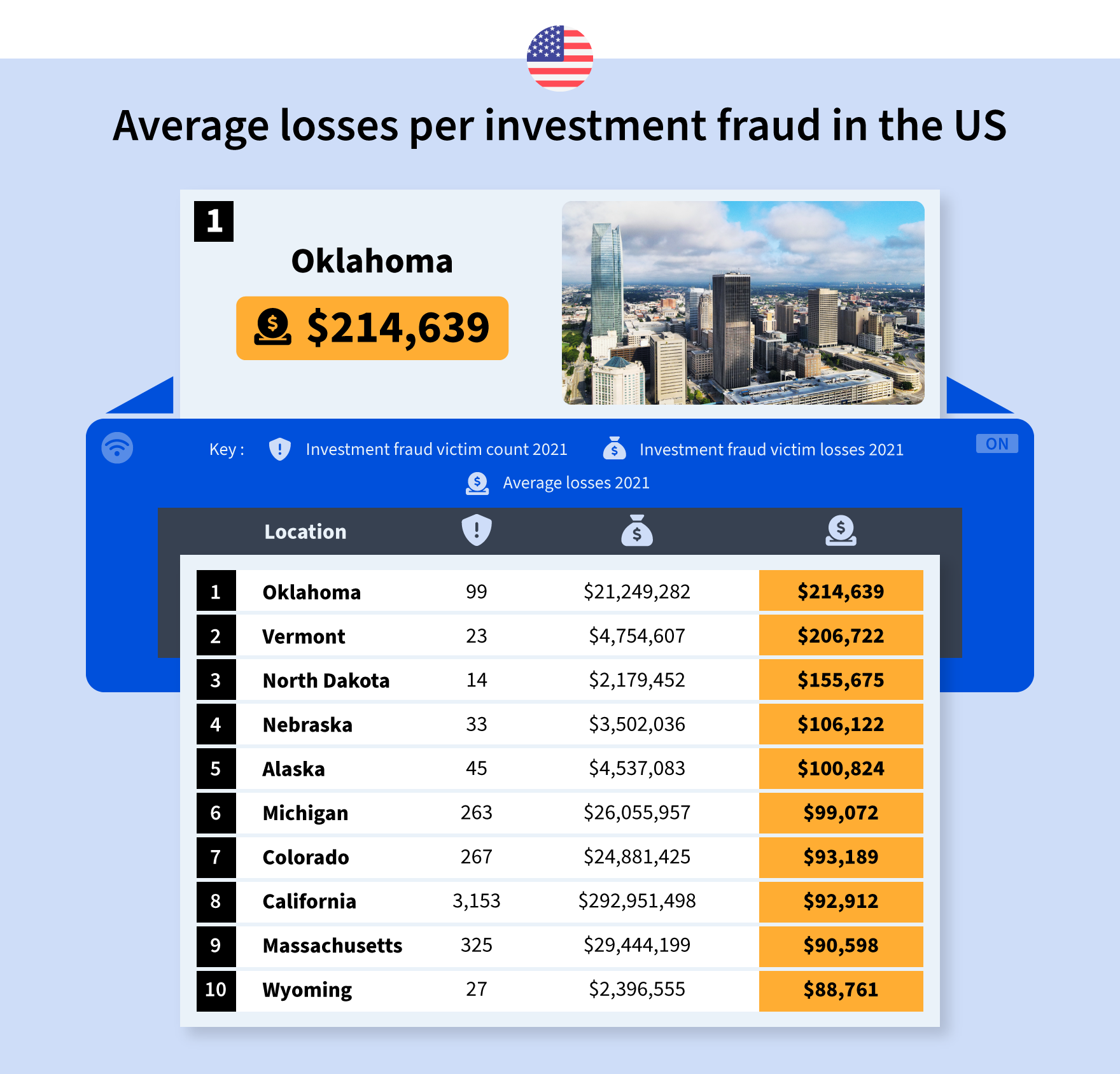 Oklahoma is the state where fraud victims lose the most money, with average losses per incident reaching $214,639 in 2021. These huge losses are followed relatively closely by Vermont, where the average amount lost by a fraud victim is $206,722. 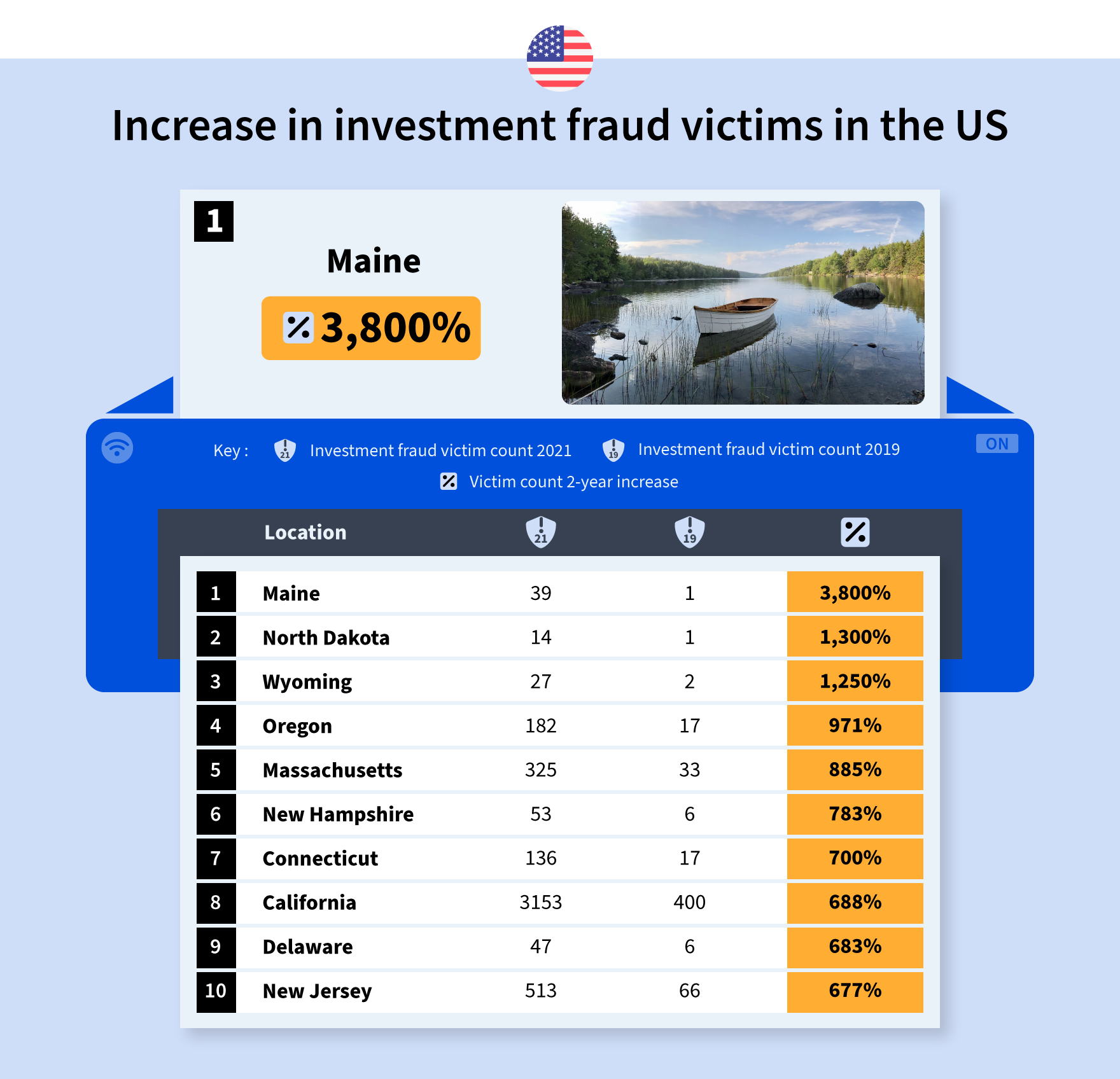 Increase in average losses per investment fraud in the US 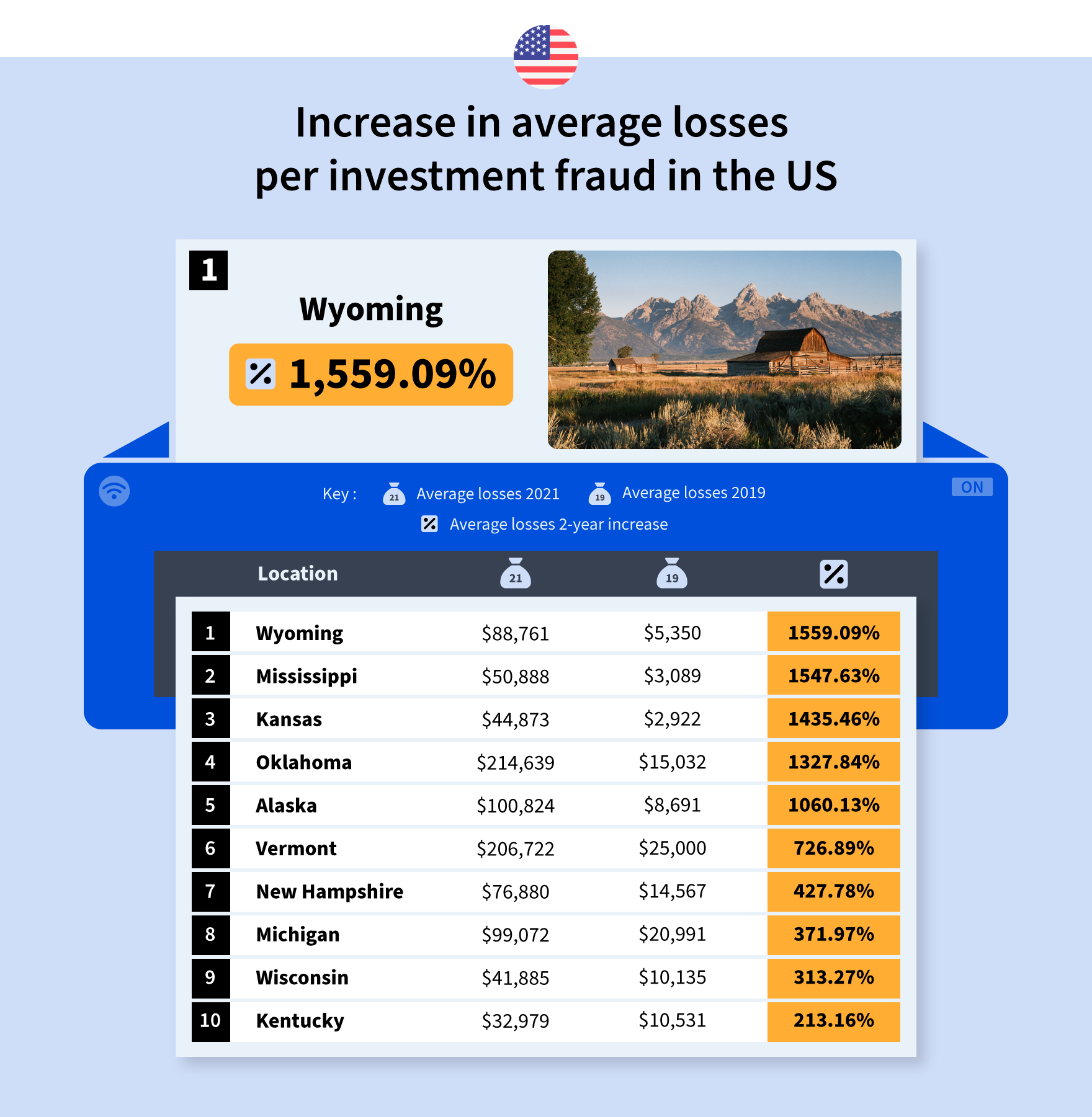 Wyoming has the biggest increase in the amount of average losses per incident of investment fraud, with losses increasing by 1,559.09%. Wyoming is closely followed by Mississippi and Kansas at 1,548% and 1,435%, respectively.

Last but not least, we turn our focus to investing in Australia, revealing the parts of the country that have been hardest hit by investment fraud in recent years. 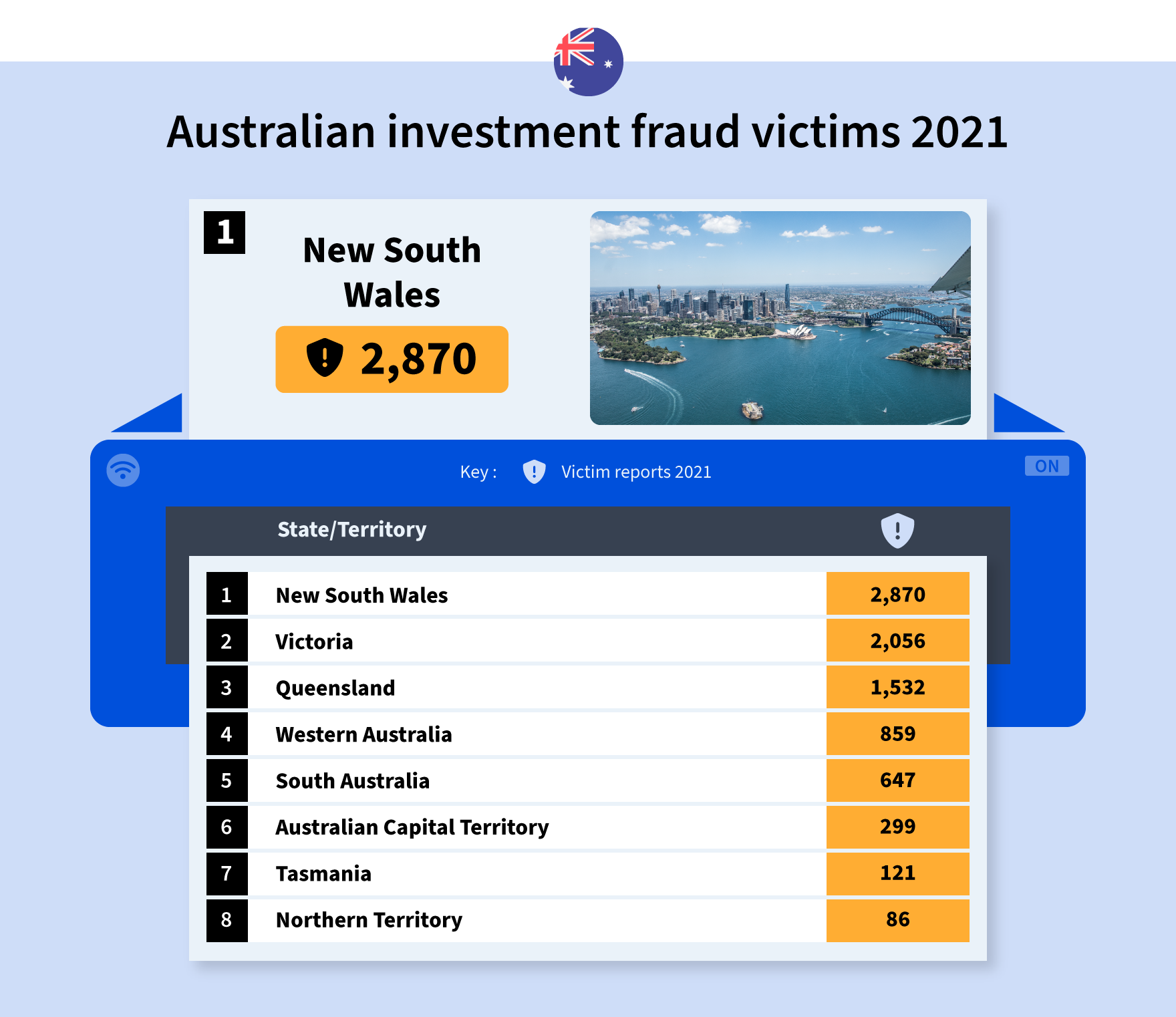 New South Wales has by far the largest number of investment fraud victims of any Australian state or territory, recording 2,870 victims in 2021 alone. Victoria has the second-highest number at 2,056, while Queensland came third with 1,532 victims. 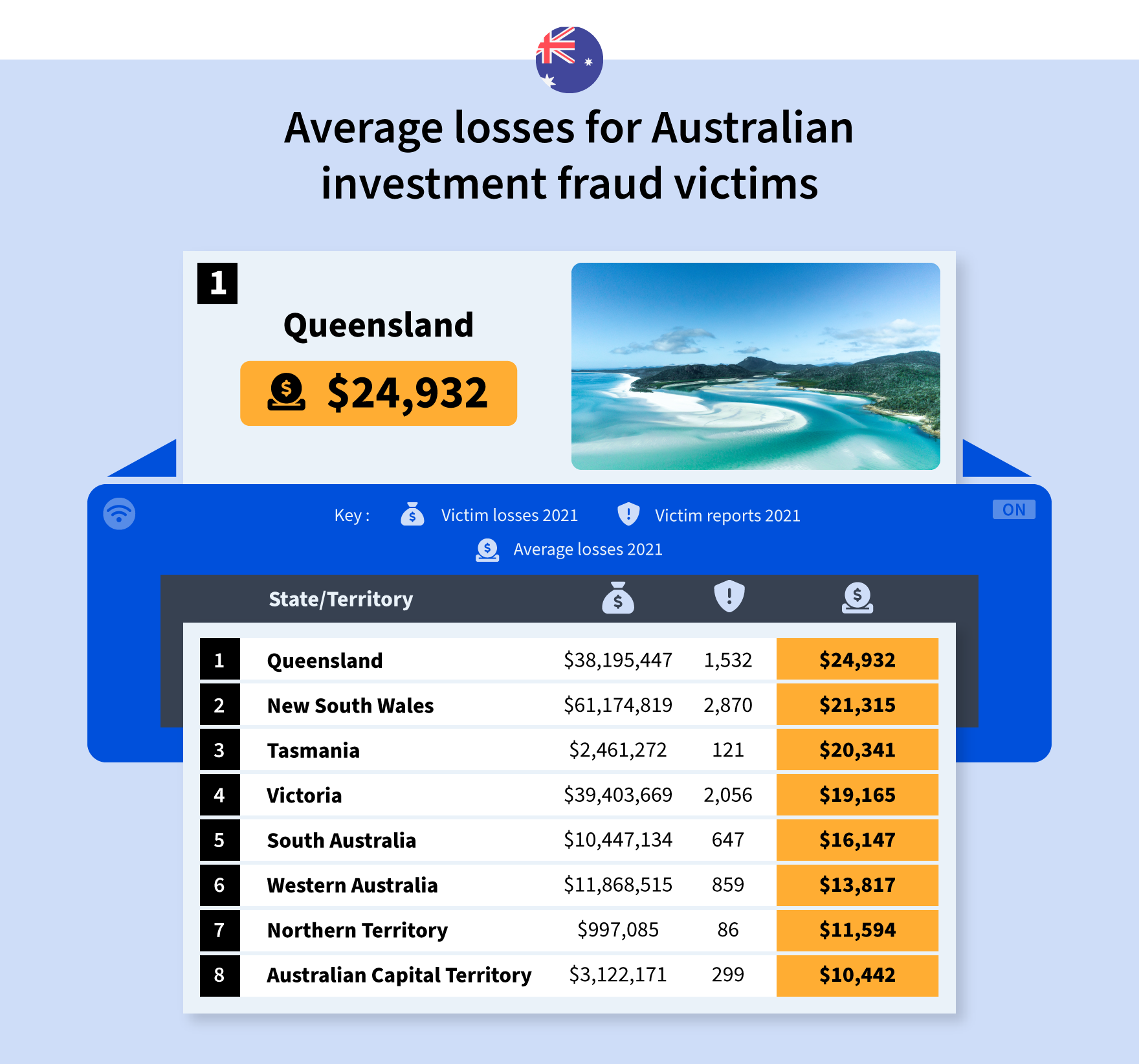 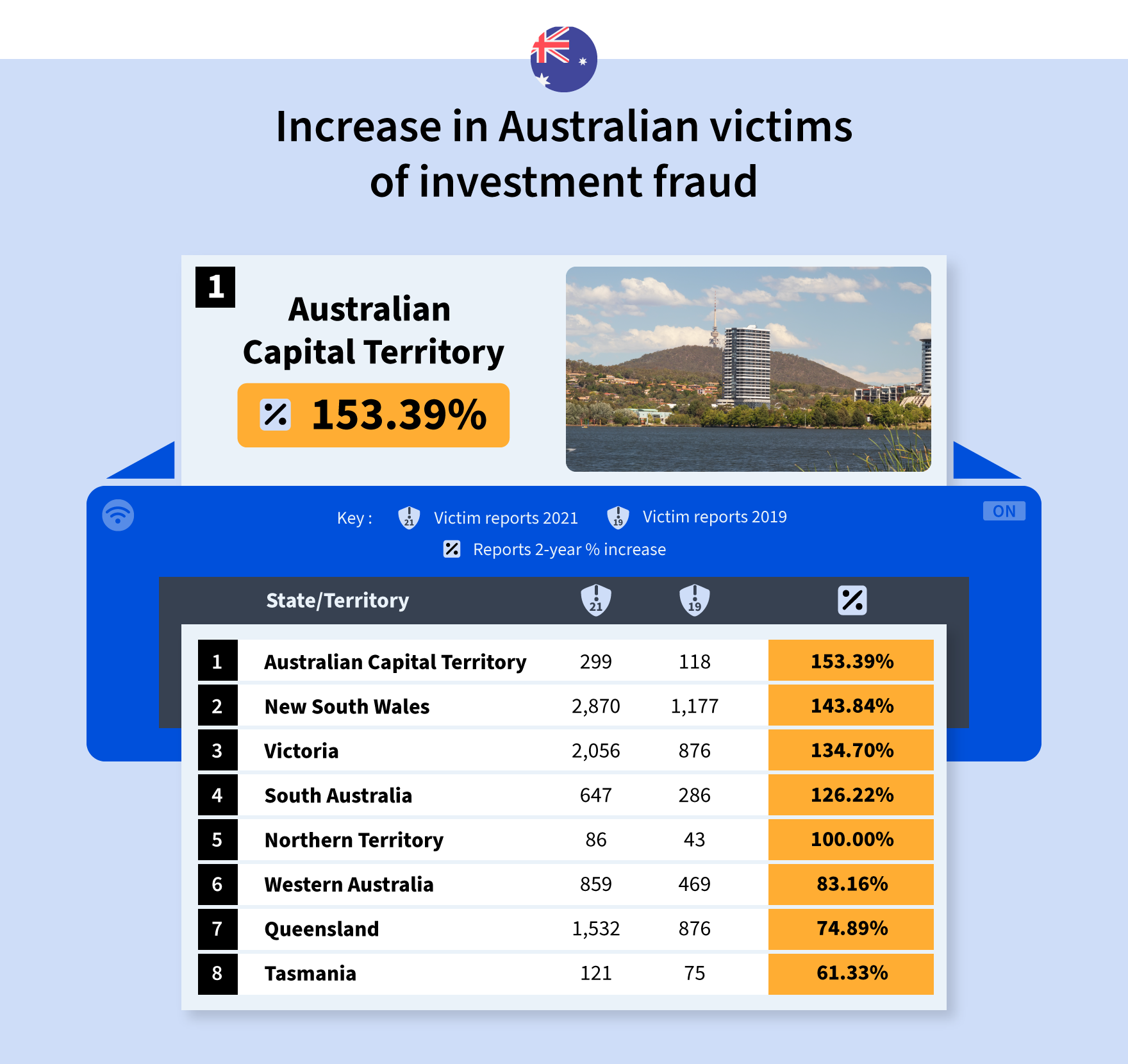 In addition to having the highest rate of investment fraud in the country, the Australian Capital Territory has also seen the biggest increase in investment fraud. Since 2019, when the number of reported investment fraud victims in the area stood at 118, cases have increased by 153% and now stand at 299 per year.

The second-highest rate of increase was seen in New South Wales, where the total number of investment fraud victims increased by 144% from 1,177 to 2,870, while Victoria took third place with an increase of 135%.

Increase in average losses per investment fraud in Australia 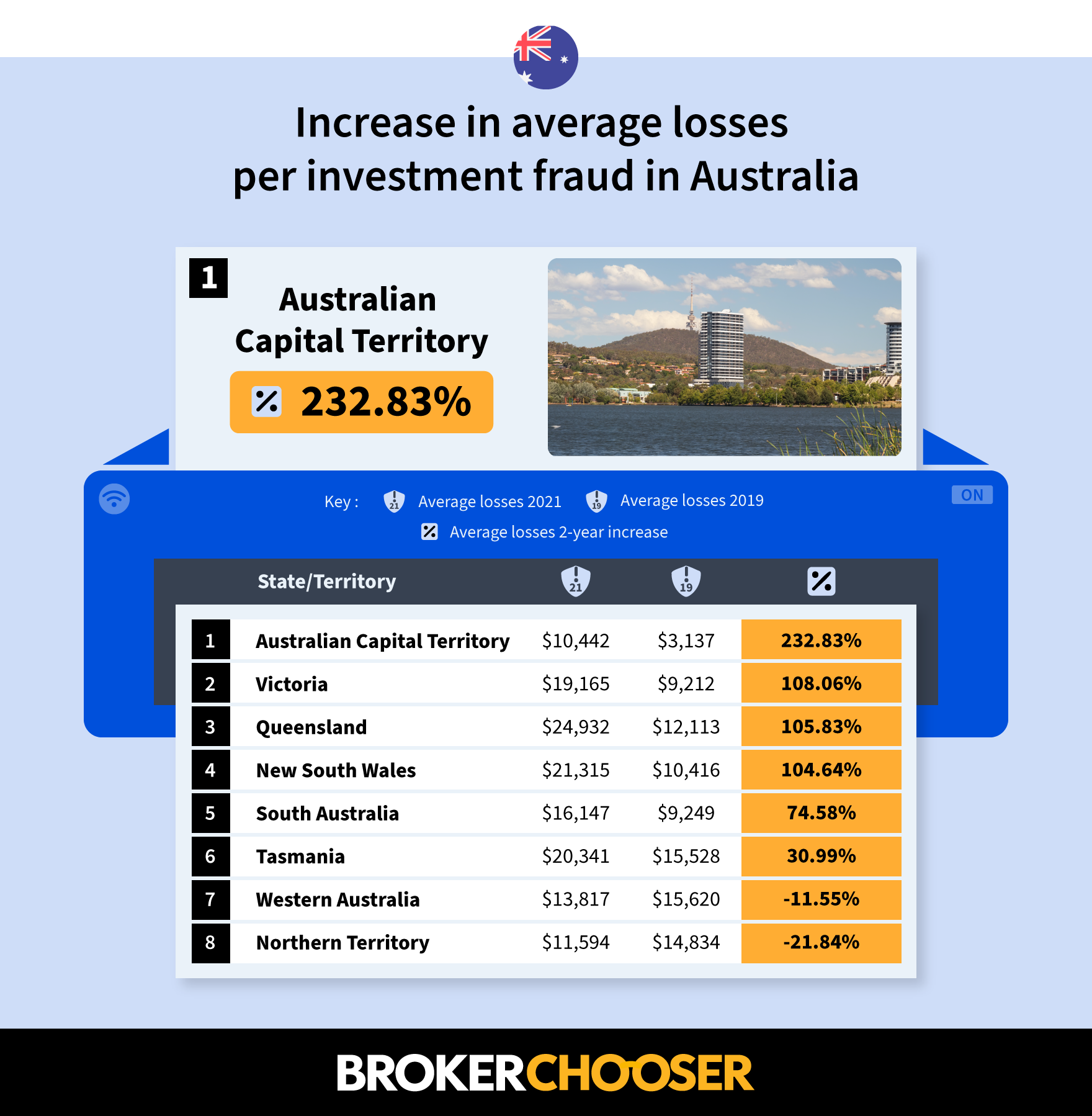 The Australian Capital Territory makes a third appearance in the top spot with the highest increase in average losses seen by victims of investment fraud. In 2019, the average loss in the area stood at $3,137 and rose to $10,442 by 2021, an increase of 233%.

This increase far surpasses any other state or territory, with second place Victoria recording a percentage increase of less than half of that at 108%.

For the UK, we used ONS data to review the levels of fraud and computer misuse in the various police force areas of England and Wales, to see which parts of the country have the biggest fraud problem. We also used FCA data to analyze various aspects of the UK fraud landscape including the most common scam types, the most popular contact methods used by scammers, and the increase in scam-related enquiries received by the FCA in recent years.

For the USA, we used data from the FBI’s Internet Crime Complaint Center, which showed levels of investment fraud in each state in 2019 and 2021. We also used this data to reveal the place with the highest average losses per fraud victim, and the increases in cases and losses since 2019.

For Australia, we used fraud data from Scam Watch to reveal the states and territories with the highest rates of investment fraud and the highest losses per person, as well as tracking changes since 2019.