The banks and brokers that have been hit with the biggest financial penalties.

Banks and stockbrokers are supposed to act in a fair and transparent manner with their customers and investors. However, when they don’t they are met financial penalisation, but which banks have received the heftiest fines?

Given that they’re responsible for looking after vast sums of money, the fines that have been handed out to the world’s major financial institutions are on a truly huge scale and for a variety of different offences. But what have been the biggest one-off fines of the last 20 years? 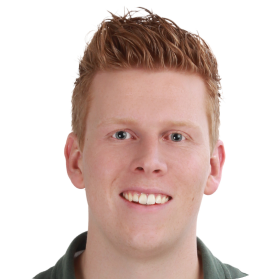 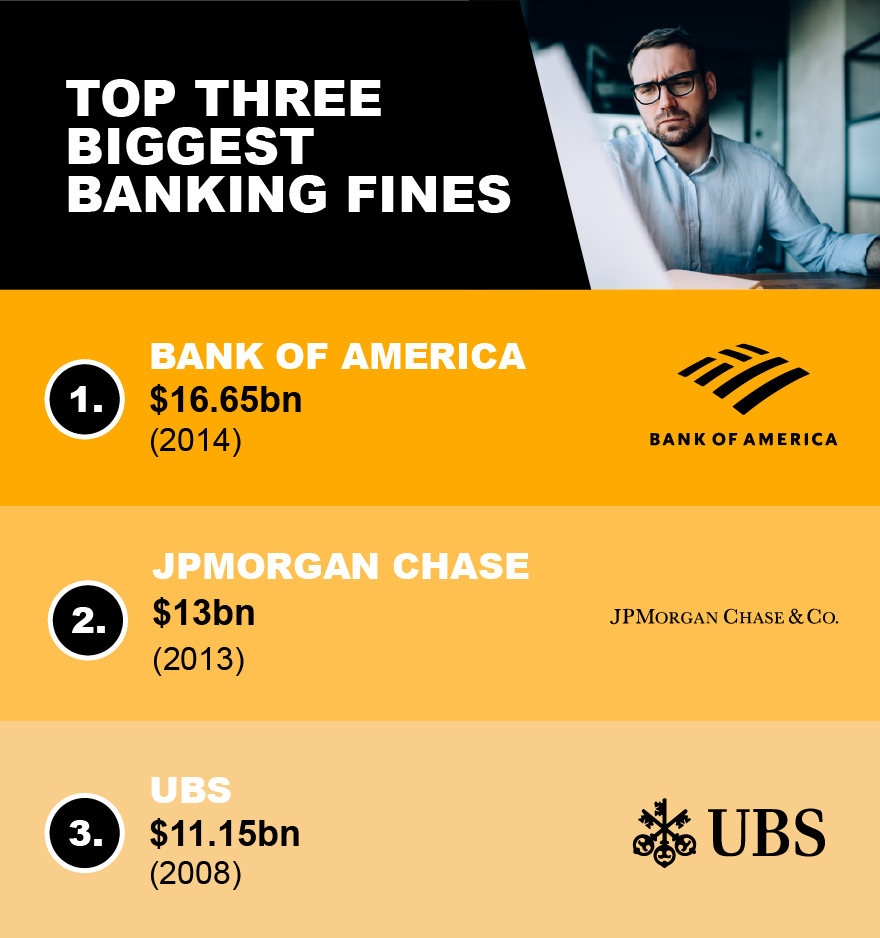 The Bank of America actually accounts for half of the top ten biggest fines of all time, but by far the biggest was the one that they incurred in 2014, for knowingly selling toxic mortgages to investors, a big contributor to the financial crisis of the late 2000s.

The selling of these mortgages ultimately led to a housing bubble that burst spectacularly, with ramifications for the global economy for years to come, and the bank was fined a then-record $16.65bn.

Another of the big US banks, JPMorgan Chase takes second place, with JPMorgan Chase being forced to pay $13bn in 2013, which again was a record fee at the time.

Similarly to Bank of America’s mega-fine, it was to do with toxic securities abuses in the time of the financial crisis and was agreed upon after lengthy negotiations with the US Justice Department.

They were found guilty of misrepresenting auction rate securities to investors, concealing the true liquidity risk of the products. 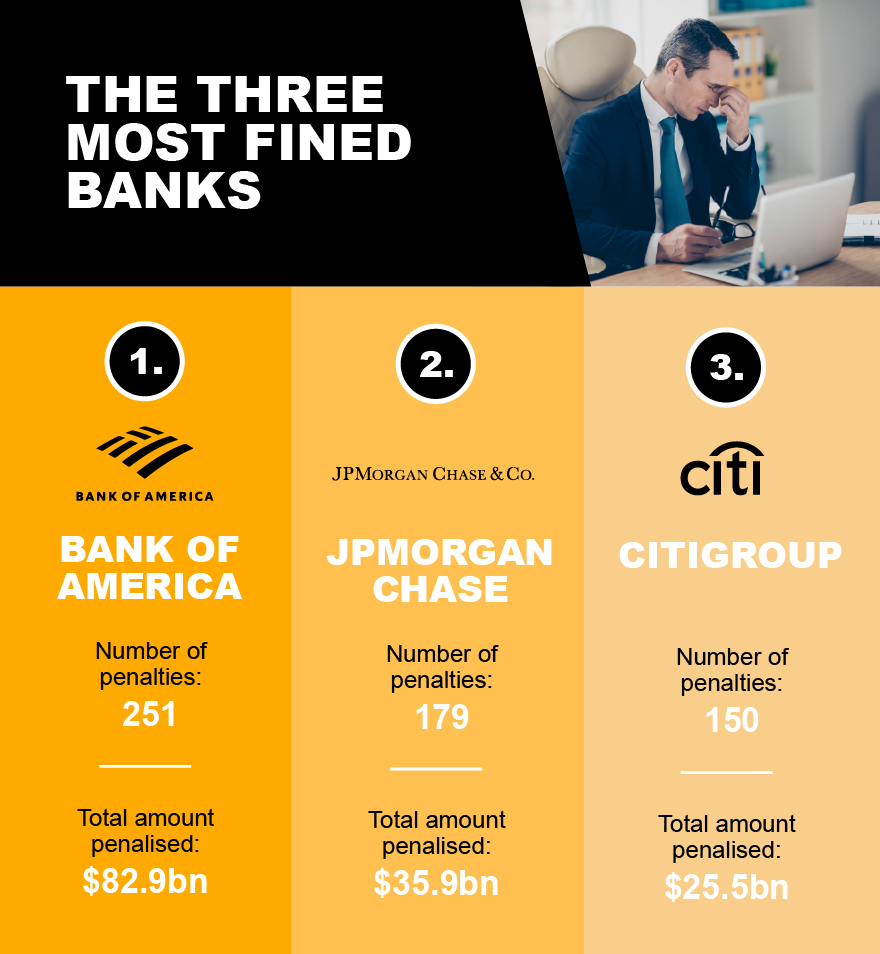 We’ve already seen that the Bank of America has the dubious honour of the largest one-off fine of all financial organizations, but that still only makes up a fairly small percentage of the total amount that they’ve been fined over the years, clocking up a total of over $82bn across 251 different fines over the past 20 years.

Many of these fines relate to the 2008 financial crisis and companies that Bank of America bought during this time such as Merrill Lynch and Countrywide.

As was the case with one-off fines, JPMorgan Chase takes second place behind Bank of America, although by some distance, with fines totalling $35.9bn.

The biggest of these was for $13bn in 2013 and one of the most recent was a $250m fine over weak controls in its wealth management division in 2020.

The Citigroup investment bank and financial services corporation has been fined over $25bn across 150 different fines over the years, with the biggest of these being $7.1bn that was bought back in missold securities in 2008.

This was closely followed by a $7bn fine with the Justice Department over the group’s role in selling mortgage-backed securities that was paid in 2014. 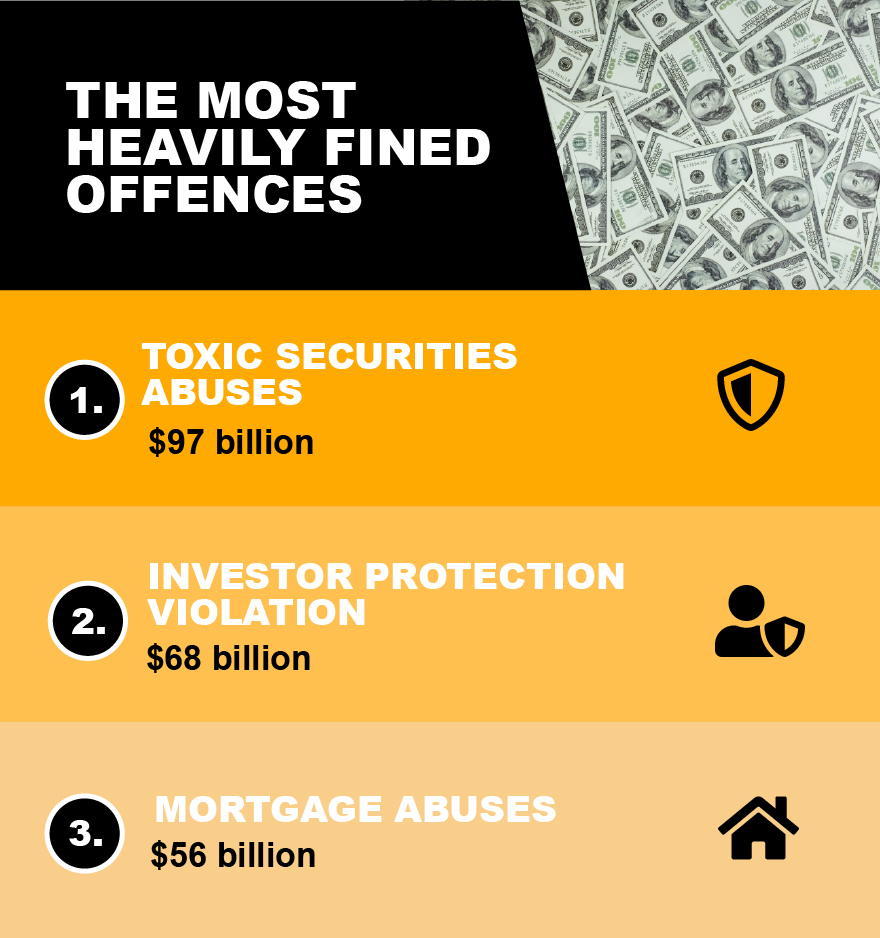 The offence that saw the heaviest penalties overall for financial institutions was ‘toxic securities abuses’ which refers to the sale of investments that are either difficult or actually impossible to sell on, due to demand for them collapsing.

While $97 billion was fined for this offence in total, the actual number of fines handed out was only 96, meaning that each fine amounted to just over a billion dollars on average!

In second place, there were over 1,400 fines that added up to over $68 billion for breaches of the Investor Protection Act, which was introduced in 2009 in the wake of the financial crisis and aimed to prevent the same problems from happening again.

This regulation covers things such as new financial products, fee structures and trading structures, to ensure that investors aren’t caught out by shady practices.

83 fines were handed out for offences within the mortgage sector, but they added up to over $56 billion, meaning that each fine was worth an average of over $680 million.

Many mortgage lenders have landed themselves in hot water over the years and each of the biggest fines handed out in this sector went to the Bank of America, including the mega $16.65 billion fine which we’ve already discussed! 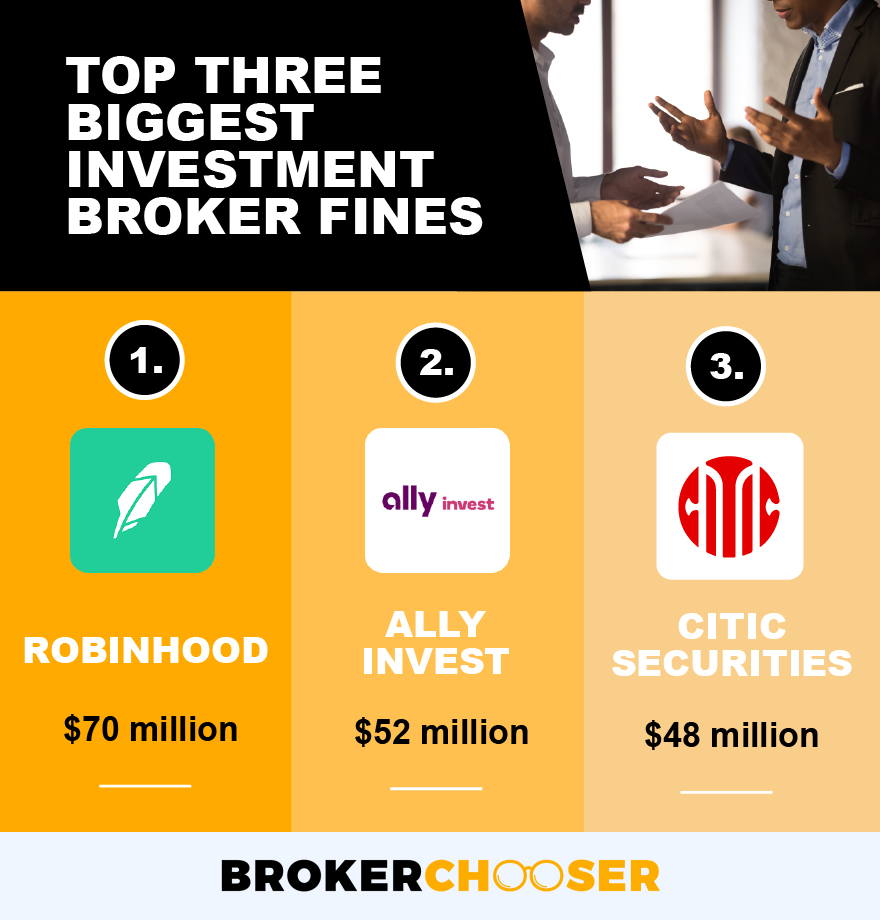 Here at BrokerChooser we allow you to objectively compare brokers across the board on a wide range of different criteria, so we wanted to also take a look at which of the brokers in our database have been fined to date (to our knowledge). Based on publicly available info, we found that just under a third (30%) of the brokers in our database have been fined, and here are some of the biggest. While the fines listed here are hardly pocket change, they’re still only a fraction of those paid out by the bigger organizations like banks, although it’s worth noting that these brokers are usually much smaller companies, so the fines will still have hit them hard!

1. Robinhood - $70 million
Robinhood is one of the best-known trading apps around and experienced rapid growth ahead of its much-anticipated July IPO.
However, it is also currently facing multiple lawsuits and was recently hit with a $70 million fine by the Financial Industrial Regulatory Authority (FINRA), the largest fine ever levied by the agency, for “systemic supervisory failures” and “false or misleading information”

2. Ally Invest - $52 million
Ally Invest paid the US Justice Department $52 million in 2016 after allegations that its subsidiaries had wrongly sold subprime residential mortgage-backed securities (RMBS) back in 2006 and 2007.
The settlement agreement also meant that Ally had to immediately cease operations of its registered broker-dealer, Ally Securities, LLC.

3. CITIC Securities - $48m
CITIC Securities was among three big brokers in China that were heavily fined in 2017 for their role in the 2015 stock market crisis in the country.
They were fined 308 million yuan by the China Securities Regulatory Commission (CSRC), which translates to about $48 million!

All company fine data was sourced from Good Jobs First’s Violation Tracker, which shows fines from 2000 to the present day.

Figures correct as of July 6th 2021, looking at companies under the “financial services” category.

Data relating to brokers in BrokerChooser’s database was sourced from a variety of news articles and sources, which you can view here.

Bence’s purpose is to help you to understand the logic behind financial services. In his master’s studies, he specialised in business economy and finance to be able to give you a clear picture of the brokerage world. Having reviewed multiple brokers and robo-advisor services, his goal will always be to guide you in the world of investing as it is.

Bence’s purpose is to help you to understand the logic behind financial services. In his master’s studies, he specialised in business economy and finance to be able to give you a clear picture of the brokerage world. Having reviewed multiple brokers and robo-advisor services, his goal will always be to guide you in the world of investing as it is.