How to trade forex - a practical example 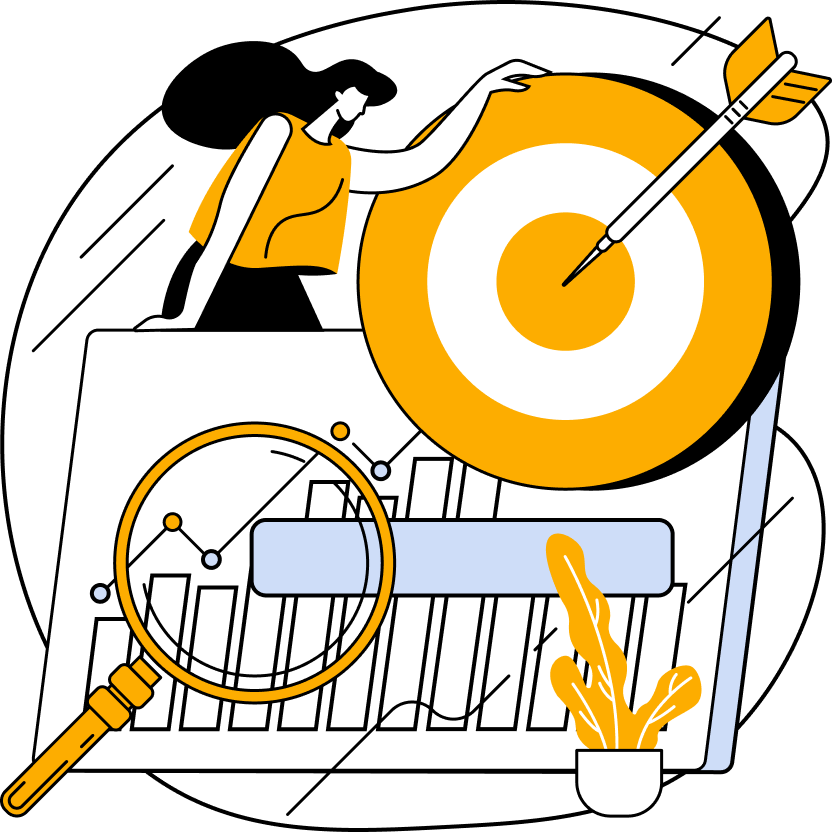 Foreign-currency trading is not a straightforward investment. There are a number of advanced forex trading strategies that traders follow and the risks associated with each trading strategy are quite high. Hence it is important that future traders educate themselves before engaging in forex trading. To help with this endeavour, a forex expert at BrokerChooser drew up an example of a practical forex trade to guide you through the entire process step by step.

How to trade forex
The essence

Although there are numerous forex trading strategies out there, there is no such thing as a universal strategy that guarantees success. The best forex strategy is one that is tailor-made for a particular trader, therefore each strategy will be unique. In general, it needs to be adapted to the risk appetite, the emotional and mental state, motivation, daily schedule and trading horizon of a given trader.

If you are a beginner who is interested in trading currencies, you might wish to define your trading style and practice trading by opening a demo account at a forex broker.

Check out the winners in the BrokerChooser annual competition for the title of best forex broker.

You can also decide to copy the trades of others, but then all the above factors will reflect the preferences of the original trader. It is quite common that forex traders take certain elements from someone else’s trading strategy and use them to build their own, much like a puzzle. It can end up being a lengthy procedure but might well be worth the time and effort.

How to trade forex
Most popular forex trading strategies

In general, we can say that some of the most widely used strategies in the forex trading universe are:

The forex trading example described in this article is based on the trend following strategy.

How to trade forex
Trend following strategy - an example

In our example, Krisztián opened a USDJPY position at the end of May. In the chart below, each candle represents 1 day. Krisztián followed these 10 steps in the course of the trade.

Krisztián will now explain these steps by going through them one by one. 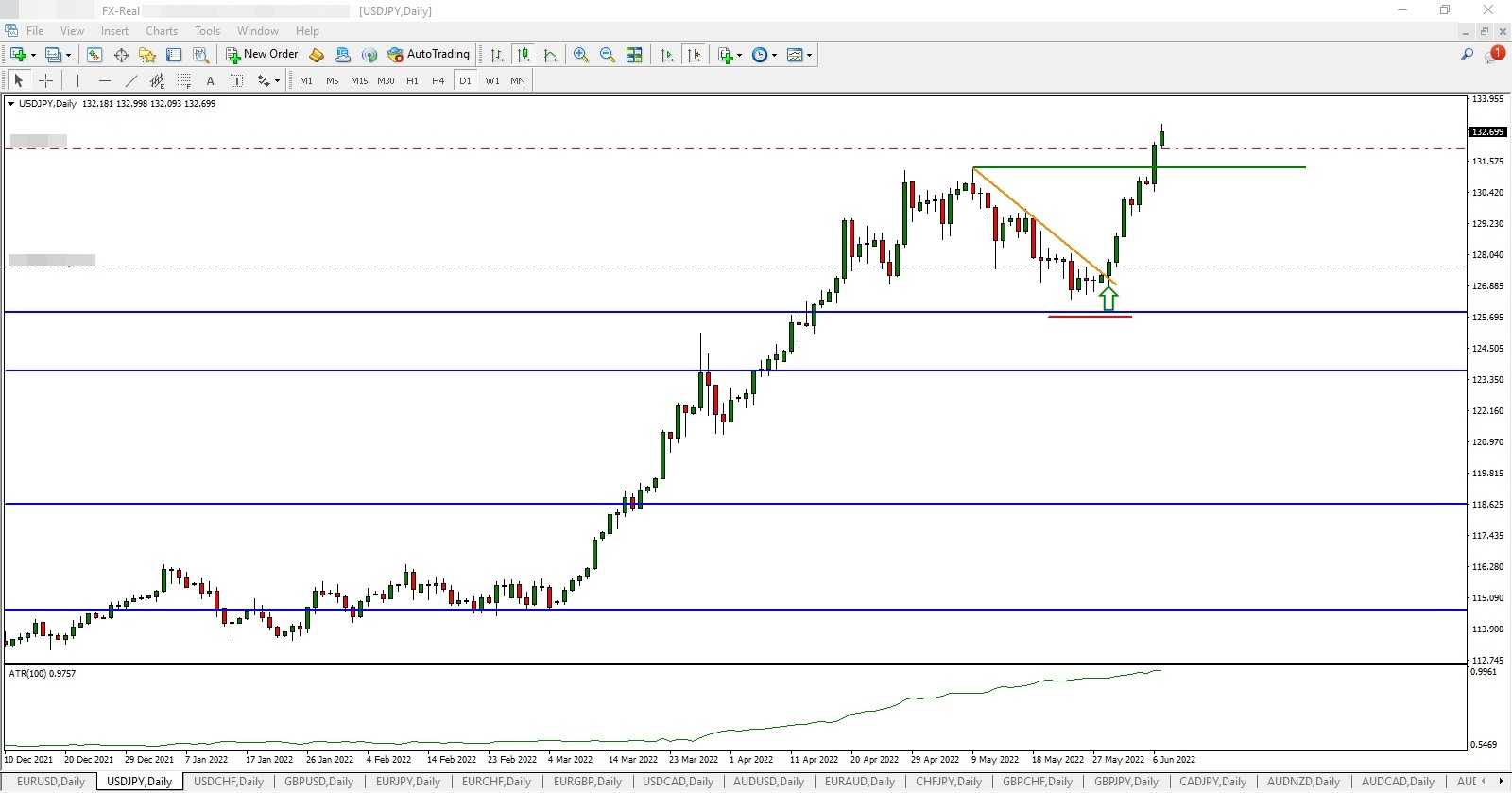 As suggested by the name, when I work with a trend following strategy, I open a position that is in line with the main trend of the given currency pair. I start by “zooming out” and I examine the main trend over a longer period of time. In this example, by looking at data from the past 10 years, it’s clear that there was an upward trend in the USDJPY cross and the buying side dominated. Thus, I have looked for a good opportunity to enter the market with a long position. A long position here (in the case of  USDJPY) meant buying USD and selling JPY. Longer trends give strong support and resistance levels, which are key factors when determining the target and stop-loss prices.

Establishing the main trend is a “visual test” in the sense that by looking at the graph it should become clear what the overall direction of the given currency pair is. If a clear trend fails to emerge, I do not open a position. Note that the forex market has fractal-like movements; for each trend you may see a smaller trend that could be either similar or point in the opposite direction. My experience is that it could take a while to develop the skill to discern the current trend in the market and this is one of the reasons why fully automated strategies are not among the most successful forex trading strategies.

As a next step in our example, I examined the trend over a shorter period of time (see chart) and it was clear that the buy side was dominant, hence I decided to open a long position. At that point, I was only swinging into action when the exchange rate started retreating from the peak and the counter trend came to an end (see the orange trend line on the chart).

I used the ATR at the bottom of the chart to measure volatility. Before I opened the position, the ATR stood at 0.935. This means that the USDJPY currency pair moved 93.5 pips on average a day. I decided to calculate with double this rate so that a random move in the market would not hit the stop loss. In other words, I set the stop loss level at 187 pips from the value at which I entered the market. This was my risk level, I had to decide the size of my position in light of this.

I also looked at levels where volatility could increase. I marked these in blue on the chart.

I kept an eye on a number of economic indicators that could trigger higher volatility, for example:

In my opinion, the lot size of a particular forex position should always hinge on current market volatility. When volatility is high, I open a smaller lot and at times of lower volatility, I open a bigger lot, while the percentage of risk is fixed around 1%. In our example, I calculated my lot size for 187 pips, which equals 1.5% risk if the initial stop loss is hit by the market.

When the counter trend ended, I applied the 187 pips to the current price so that the stop loss fell in the area marked in red on the chart. This is below the level where volatility may increase (blue line). The estimated target price is marked in green.
Estimated reward: 376 pips
Risk: 187 pips

Given that the reward is more than double the risk, it was worth opening the position even with a low hit ratio.

I marked the level where I opened the position with a green arrow (black dashed line is the buy level). I timed it after the counter trend ended, the return / risk ratio was at least 1.5 and the expected value was positive.

The market advanced so much on the second day that I managed to reduce the risk on my position from 187 pips to 56.4 pips by raising the stop loss level (red dashed line on the chart). As a result, the reward/risk ratio increased to 6.7 (376/56.4). I continued to hold the 2x ATR distance.

As you can see in our example, the market continued to rise on the third day and I managed to push the stop-loss to the buy level. This means that in a worst case scenario, I could close the position (sell) at the level where I opened it. It made no sense to calculate the reward/risk ratio at this point, as there was essentially no risk. In general, this is a sweet situation to be in as you cannot lose but you are still in an upward trend so it makes sense to hold on to your position.

At this point, the smartest thing to do was to stay with the trend for as long as possible. By the end of the third day, the market advanced so much that I pushed my stop loss to a level where I was in a winning position. My plan was to reduce my floating profit while the cross was moving closer to the target price.

As the days advanced, so did my profit. Generally, if the cross breaks through the target price, I keep the position running. My profit on the trade did exceed the target price as indicated by the red dashed line.

As soon as the cross neared the target price, I started following the market with a 1x ATR as I wanted to hold on to a larger chunk of my profit. There was room for the cross to move further up, but as a rule of thumb there is no way of knowing whether it will hit the stop-loss level tomorrow. My experience told me to concentrate on factors over which I had control, which is risk management and following my rules.

Staying with our example, I would manually close the position if unfavorable economic data were released or if the cross bounced back from the target price. Roughly 1 week after opening the position, 2.4 times the initial risk was insured.

Over the following days, the USDJPY rose further and I pushed the stop loss to a higher level. When the market hit my stop loss, the profit I realized in 10 days was 4.5%.

I use the following categories for planning: Trades per year, Total risk, Probability of consecutive losing, VaR. These are stats that I rely on for strategy optimization.

I think it is important to be able to determine the maximum drawdown in advance.  What percentage of risk and consecutive losses would I be able to withstand. In general, traders need to set a percentage that ensures they avoid this by a large margin.

In  my opinion, backtesting is not really appropriate to determine whether a strategy is sound, as backtesting only takes the past into consideration. Instead, I used the Monte Carlo simulation to test whether my system works in the long run. A strategy might be good if the CAGR/maximum drawdown value exceeds 1 in the long run.

How to trade forex
FAQ

What is the most successful trading strategy?

There are no single "best" forex trading strategies that fit or work for everyone all the time. Forex traders have to find the best strategy for their specific level of expertise, experience and commitment, which may involve combining various aspects of several different strategies.

Is forex trading a high-risk investment?

Retail forex trading is considered a high-risk investment mostly because you can trade on leverage. In other words, you can borrow money from your broker to invest. If your trade doesn’t work out, you can end up losing both your own money and the amount lent by your broker.

It can be, but it’s certainly not for everyone. The European Securities and Markets Authority (ESMA) requires brokers to emphasize what percentage of retail investor accounts lose money trading CFDs (through which a significant part of forex trading is done). Depending on the broker, this figure is usually between 60-90%.

Krisztián has 15 years of experience in proprietary trading, mainly in the interbank currency market as a foreign exchange risk manager. He received his MSc degree in International Business from the University of Middlesex. He is interested also in real estate and dividend growth investing. His purpose is to help people find the best investment provider.

Krisztián has 15 years of experience in proprietary trading, mainly in the interbank currency market as a foreign exchange risk manager. He received his MSc degree in International Business from the University of Middlesex. He is interested also in real estate and dividend growth investing. His purpose is to help people find the best investment provider.